I just released V2.0 of "Hurra - ich wachse!" which is a managing app for body measures/seizes for children aged 0 - 18 years. You can record data for body height, weight, head girth, skinfolds, hip and waist as well as for blood pressure. Additionally the program calculates the body mass index (BMI) and body fat percentage. Data can be viewd graphically or by table and can get compared with a current set of reference data. 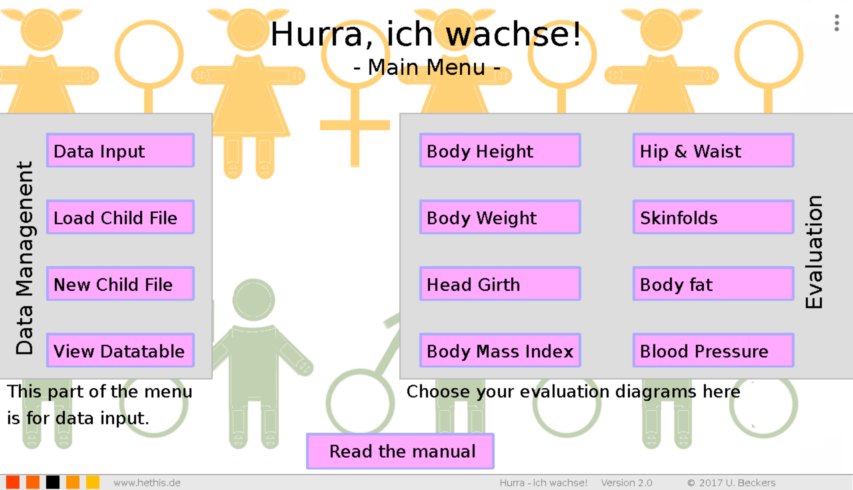 It mainly targets on parents of central Europe since the reference data is based on materal acquired during a medical statistic study in Germany by the Robert Koch Institute. The data is probably pretty valid for the neighboring countries of Germany.
Version 2.0 supports English and German language. 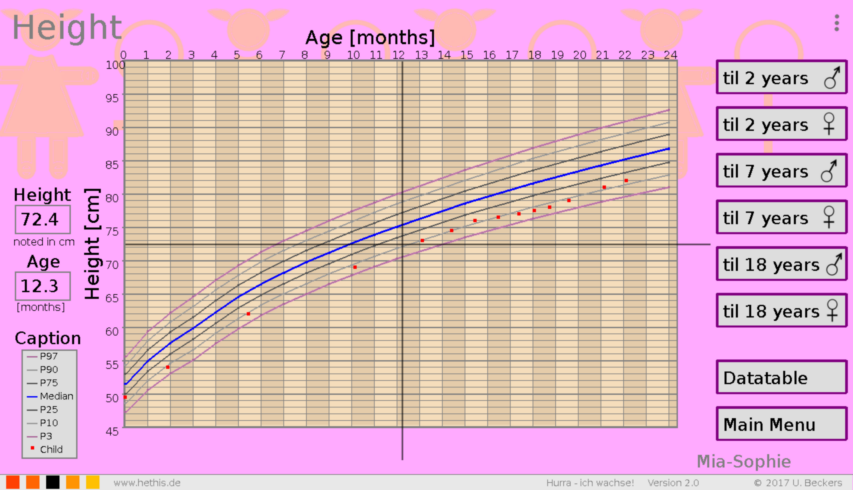 This week there's a special discount on this software at the google play store. Just 0.59EUR. Grab it while the offer lasts.

Demoversion with enabled but limited saving function now. Some other small changes.
Top

Fixed a stupid bug in saving routine introduced in V2.1 (silly me).
Now a version for Amiga is also available (full version, free of charge).


Get it from http://www.hethis.de/software/hiw/hiw_manual_en.html while it's fresh

for MorphOS, Amiga and Windows
For Android go to the Google Play Store: https://play.google.com/store/apps/deta ... ethis.hiwd
Top

changes:
- new: View data from a 2nd child simultaneously on diagrammes for body height, weight, head girth and BMI
- minor changes of the UI and localization

- fixed a very stupid bug in V2.3 which halted the program when a new dataset was created.
- unicode-support
- 64 bit version
Top

Logged in into the google dev console the first time for more than a year today and set the app "HIW" to "free" now. Will replace the demo version with the full version, too (once i set up the APK compiler on my current laptop or at least dig out my old apk dev computer out of the closet).

Maybe I take up development again, but currently I am too short on time.

Bottom line about trying to sell an app on the play store: at least for this app it didn't worked out. The app itself is not perfect but generally does what it promises. It seems to have a few issues on some devices. I guess the "old economy style" - offering a good for a fee - is just very dead. Most apps are free in initial version today and offer some in app sales. Over the 2-3 years I actually maintained the app i got about 400 downloads of the free version and a bit below 50 for the commercial version (EUR 1.19). Also I got a letter from a legal office to change the name as they were claiming I had hurt their name rights (I just changed the name but never responded to the letter) - app is called now HIW. And a bad rating and briefly afterwards a lot of SPAM that wanted to sell me positive ratings... (coincidence?).
So far my experince to do something commercial on the play store.
Maybe I'll do a 2nd attempt at a later point of time with another app. My inital goal was to gain at least that many sales that it funds the APk compiler and the dev machine - goal not reached (eventually it dosn't matter, at least it was fun to actually get a payment from google at all - i think the registration fee of $25 and a a few chocolate bars were paid by my customers, thanks for that (really!)).
Top

A question. How did you market that App, or did you?

For basically if you just threw it out there and never target marketed it anywhere, then 50 sales is not that bad I think and shows that a specialized App like yours can have a market.

Basically I think something like China could have a better market for an App like that since many of them (parents) are still obsessed about their (children's) height and would be interested in looking at something like that all the time.

Another place where could be in Finland if you could somehow make the mental connection to the "Neuvola"-system that we have here in Finland. For only place I have ever bumped into that kind of chart was when my daughter was measured in this "Neuvola"-system.

Neuvola system is a system where every parent in Finland takes their children into this hospital kind of place couple of times a year for the first few years of children's lives, where Children's health and measurements are being monitored and advice is given for parenting, so mental connection to that could get a couple of sales in Finland.
Top

Eventually I didn't advertize the app. I tried to set up a little campaign with google ads. I have good experience with google ads for real goods. But the system is pretty different for apps 8at least it was about 4 years ago when I tried that). You literally cannot do a small campaign. I set up a campaign, got called by google a few times to help me finalize the campain. But they force you into spending real money. Eventually I cancelled that campaign before it really started: the risk to sink significant money in it was too high. But as said for real goods I really like google ads and the few EURs I spend yearly yield quite some customers on that market (light sources). But for apps it seems to work out only if you think BIG. And this app isn't big.

Regarding other markets. I would need the actual data for these countries. Finland is probably pretty similar to Germany, maybe the average Suomi guy gets a centimter taller than a German, but it's pretty close. Nevertheless I would need a translation...
For China I'd need chinese data - obtainable, but a bit of work.

Anyway, it's really interesting to do this stuff, you get insights and learn quite a bit. I'll do another try (once I have time again, which currently is very limited do to a new job, the kids and sports) - the goal is not to get rich (wouldn't say no to that though...), but the sportive/game/get to know aspects. How to get money out of the google eco system? It looks and sounds easy, but - what a surprise - it isn't. I am interested if others share their play store experience (or other experiences how to get users (paying or non paying)).
Programming is the fun, but the sport is to get users!
Top
Post Reply
9 posts • Page 1 of 1